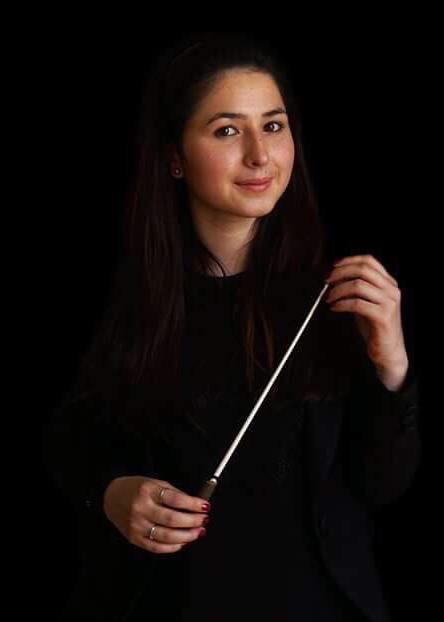 Negin Khpalwak, born in 1997 in Kunar in eastern Afghanistan, is the first Afghan female conductor and was the conductor of Zohra, the first orchestra in Afghan history composed of only women. The group was a powerful symbol of a new Afghanistan. As a high achiever at the Afghanistan National Institute of Music (ANIM), she played piano and participated as a singer in ANIM’s choir. She also played sarod (a stringed Hindustani instrument) for three years before switching to piano. She is presently studying conducting and piano privately in the D.C. region.

Ms. Khpalwak has traveled to several countries representing Afghan musical culture and beauty. In 2017 she toured India with Zohra. Khpalwak also toured Europe and led Zohra at the World Economic Forum in Davos. As part of the Nahid Choir Group, Ms. Khpalwak traveled to Turkmenistan and Dubai, UAE in 2015. The Afghan Youth Orchestra tour to the United States in 2012, in which Ms. Khpalwak participated as the first Afghan female sarod player, included a performance at Carnegie Hall and remains one of her proudest musical experiences.

Ms. Khpalwak is a well-known Afghan artist and although she came to the United States in August of 2021, she remains deeply connected to her colleagues from Zohra and to the plight of women in present-day Afghanistan. As a group, Zohra was awarded the Freemuse Award in 2017 and the Human Spirit Award in 2016. Khpalwak speaks Pashto, Dari (Persian) and English. She loves to listen to music, read books, and enjoy the outdoors in her leisure time.